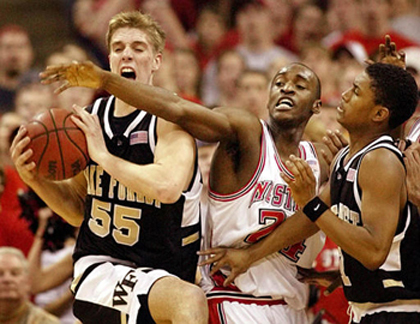 Remember all the great moments from the Wake Forest-N.C. State rivalry? Neither do we.

When the ACC raided the Big East a few years ago in a desperate attempt to become a football power, it ended one of the things that I used to love about the conference — every team played every other team once a year in football and twice in basketball.

I especially miss the double round-robin in basketball. The added familiarity with opponents better prepared ACC teams for March Madness, and it made conference rivalries stronger. If N.C. State lost its first game against one of the Big 4, I always knew there would be a rematch.

With the expansion to 12 teams, it was bad enough that N.C. State was no longer guaranteed to play Duke twice in basketball (or at all in football). With the conference growing to 14 in a year or two, it was inevitable that more rivals would play each other less frequently.

Under the new scheduling format announced last week, each basketball team gets one primary rival to play in a home-and-home every year. In N.C. State’s case, it’s Wake Forest. No offense to the Deacons, but the one home game that Wolfpackers care about above all others is against Carolina. Once every three years, the Tar Heels won’t have to come to Raleigh.

As Caulton Tudor wrote for The News & Observer last week, the league showed a long time ago that expansion and the accompanying schedule changes were more about TV money than diehard fans. With the trend in college sports moving toward football-driven super conferences, I’ve resigned myself to the fact that many of the intimate rivalries of the old ACC are a thing of the past.

Since this really is all about football, ACC officials could do one thing that would make the new order a little more palatable — come up with some football divisions that don’t look like they were randomly drawn out of a hat.

The current divisions are a jumbled mess that were set up primarily to try to get a Florida State-Miami championship game every year. (Remember all those memorable games they’ve played at the end of the season? Me neither.) We’ve been through seven seasons with this format, and I still have a hard time remembering off the top of my head which teams play in the Atlantic and Coastal divisions.*

The powers that be had a chance to fix this with the additions of Syracuse and Pittsburgh. Instead, the two new schools were dropped into the existing divisions, so we’re left with this:

NOTE: Crossover opponents are paired with each other.

In a conference now spread out over more than 1,200 miles of the East Coast, it makes no sense for a team in Tallahassee (Florida State) to be guaranteed to play a team in upstate New York (Syracuse) every year without playing the team closest to them on a map (Georgia Tech). If the ACC is going to insist on a two-division format, at least make the divisions along some rational lines like, I don’t know, geographically:

By splitting the conference into northern and southern teams, the ACC could eliminate the need for crossover opponents because, for the most part, natural rivals would already be grouped together. The South Division would have more of the traditional football powers in the conference, but the North Division would claim Virginia Tech, by far the best team since expansion.

The one big drawback to this format is that the ACC would still have to split up the four North Carolina schools, putting one in the North Division. I chose Duke because, after all, it is one of New Jersey’s finest universities. Realistically, though, the ACC has shown over and over that one of the few rivalries it won’t break up is Duke-UNC. So if this actually happened, my money would be on Wake Forest filling that spot.

Changing up the football divisions wouldn’t make up for ending long-standing home-and-home rivalries in basketball, but at least it would be an improvement.

* I’m at least thankful that the ACC didn’t name the divisions something as ridiculous like “Legends” and “Leaders.”

This entry was posted on Thursday, February 9th, 2012 at 6:30 am and is filed under Basketball, Football. You can follow any responses to this entry through the RSS 2.0 feed. You can leave a response, or trackback from your own site.

One Response to ACC expansion: Watered-down rivalries and random divisions