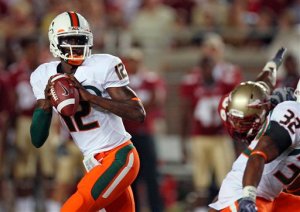 Jacory Harris and Miami provided some of the few bright spots for the ACC this weekend. (AP Photo/Phil Coale)

For a conference intent on making the case that it can be a football power in 2009, the ACC made a lousy opening statement.

Clemson’s 37-14 victory over Middle Tennessee was the marquee out-of-conference win of the weekend. The ACC’s other three nonconference wins (for North Carolina, Boston College and Georgia Tech) came against teams from the Division Formerly Known as I-AA.

Those were the highlights. Here’s how ACC teams fared in the rest of the nonconference games:

John Feinstein had some of the harshest criticism for the conference Tuesday in a column for The Washington Post:

For all the preseason hype about all the returning quarterbacks and how this was going to be the year the ACC became important again — although when exactly was the ACC important nationally outside of Tallahassee? — it took exactly one week for the league to once again be exposed for what it truly is: a basketball league. Except for the fact that, outside of Chapel Hill, it hasn’t been much of a basketball league since the now infamous football expansion of 2005.

The ACC had a rough start to last season, too, but the conference’s teams collectively rebounded to produce 10 bowl bids. The quality of play from the ACC is going to have to get a lot better to in a hurry to match that haul.

Game of the Week

Miami 38, Florida State 34. The Labor Day matchup between the two rivals was the only thing that redeemed an otherwise forgettable weekend in the ACC. Don’t expect either team to be in the national title picture at the end of this season, but at least they’re entertaining to watch again.

Player of the Week

Jacory Harris, Miami. Harris was the best player on the field in the best game of the weekend. The sophomore quarterback threw for a career-high 386 yards, passed for two touchdowns, ran for another and was brilliant on the game-winning drive late in the fourth quarter.

Team on the Rise

Miami. It won’t take long to figure out whether the Canes are legit. Their next three games: vs. No. 15 Georgia Tech, at No. 14 Virginia Tech and vs. No. 13 Oklahoma. Add the opener against then-No. 18 Florida State, and you’ve got what’s likely the toughest opening schedule in the country.

Team on the Decline

Virginia. The hot seat Al Groh was sitting on before the season started got turned up a few degrees Saturday. Groh went 56-44 overall (34-30 ACC) in his first eight seasons at his alma mater. Given some of the talent he’s had to work with, that mediocre record has led at least one commentator to call him the worst coach in college football.

This entry was posted on Thursday, September 10th, 2009 at 6:00 am and is filed under Football. You can follow any responses to this entry through the RSS 2.0 feed. You can leave a response, or trackback from your own site.